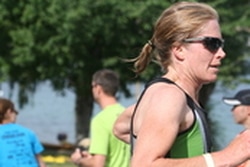 Kathy started her coaching career with high school cross country and track in 1989 while attending college. She continued to coach track while teaching in the late 90's, taking time off to start a family and she restarted with runners again in 2010. After her own positive experiences of being coached in the sport of triathlon from 2008-2011, she earned her USAT Level 1 coaching certification. She is also became certified by the United Endurance Sports Coaching Academy in Triathlon in 2015.  She has coached athletes in all running and triathlon distances, though the bulk of her coached athletes have been Ironman athletes. She enjoys working one on one with athletes either personal coaching or consulting for athletes that have questions about their training or racing.

She has raced all distances of triathlon and in 2008 competed at the  70.3 Ironman World Championships and in 2011 the Ironman World Championships in Kona. She has qualified for the New York Marathon (though did not race due to Hurricane Katrina cancellation) and has raced at Boston Marathon four different years. In the past few years, you will be as likely to see her on a trail, hiking or mountain biking as in the pool or on the road.  Kathy enjoys motivating athletes to reach their goals.